Now that we are ready to start working with Canadian Census data, let’s first briefly address the question why you may need it. After all, CANSIM data is often more up-to-date and covers a much broader range of topics than the national census data, which is gathered every five years in respect of a limited number of questions.

The main reason is that CANSIM data is far less granular geographically. Most of it is collected at the provincial or even higher regional level. You may be able to find CANSIM data on a limited number of questions for some of the country’s largest metropolitan areas, but if you need the data for a specific census division, city, town, or village, you’ll have to use the Census.

To illustrate the use of the cancensus package, let’s do a small research project. First, in this post we’ll retrieve the following key labor force characteristics of the largest metropolitan areas in each of the five geographic regions of Canada:

The cities (metropolitan areas) that we are going to look at, are: Calgary, Halifax, Toronto, Vancouver, and Whitehorse. We’ll also get these data for Canada as a whole for comparison and to illustrate the retrieval of data at different geographic levels

Next, in Part 6 of the “Working with Statistics Canada Data in R” series, we will visualize these data, including making a faceted plot and writing a function to automate repetitive plotting tasks.

Keep in mind that cancensus also allows you to retrieve geospatial data, that is, borders of census regions at various geographic levels, in sp and sf formats. Retrieving and visualizing Statistics Canada geospatial data will be covered later in these series.

So, let’s get started by loading the required packages:

cancensus retrieves census data with the get_census() function. get_census() can take a number of arguments, the most important of which are dataset, regions, and vectors, which have no defaults. Thus, in order to be able to retrieve census data, you’ll first need to figure out:

Let’s see which census datasets are available through the CensusMapper API:

Currently, datasets earlier than 1996 are not available, so if you need to work with pre-1996 census data, you won’t be able to retrieve it with cancensus.

Next, let’s find the regions that we’ll be getting the data for. To search for census regions, use the search_census_regions() function.

Let’s take a look at what region search returns for Toronto. Note that cancensus functions return their output as dataframes, making it is easy to subset. Here I limited the output to the most relevant columns to make sure it fits on screen. You can run the code without [c(1:5, 8)] to see all of it.

You may have expected to get only one region: the city of Toronto, but instead you got three! So, what is the difference? Look at the column level for the answer. Often, the same geographic region can be represented by several census levels, as is the case here. There are three levels for Toronto, which is simultaneously a census metropolitan area, a census division, and a census sub-division. Note also the PR_UID column that contains numeric codes for Canada’s provinces and territories. These codes can help you distinguish between different census regions that have same or similar names but are located in different provinces. For an example, run the code above replacing “Toronto” with “Windsor”.

Let’s now list census regions that may be relevant for our project:

purrr::map_df() function applies search_census_regions() iteratively to each element of the names vector and returns output as a single dataframe. Note also the ~ . syntax. Think of it as the tilde taking each element of names and passing it as an argument to a place indicated by the dot in the search_census_regions() function. You can find more about the tilde-dot syntax here. It may be a good idea to read the whole tutorial: purrr is a super-useful package, but not the easiest to learn, and this tutorial does a great job explaining the basics.

Pay attention to how the logical operators are used to filter the output by several conditions at once; also note using $ regex meta-character to choose from the names column the entry ending with ‘Whitehorse’ (to filter out ‘Whitehorse, Unorganized’.

Finally, as_census_region_list() converts list_census_regions() output to a data object of type list that can be passed to the get_census() function as its regions argument.

Canadian census data is made up of individual variables, aka census vectors. Vector number(s) is another argument you need to specify in order to retrieve data with the get_census() function.

list_census_vectors() returns all available vectors for a given dataset as a single dataframe containing vectors and their descriptions:

Usually it is more convenient to use search_census_vectors() to search for vectors. Just pass the text string of what you are looking for as the searchterm argument. You don’t have to be precise: this function works even if you make a typo or are uncertain about the spelling of your search term.

Let’s take a look at what this code does. Since searchterm doesn’t have to be a precise match, “employment rate” search term retrieves unemployment rate vectors too. In the next line, union() merges dataframes returned by search_census_vectors() into a single dataframe. Note that in this case union() could be substituted with bind_rows(). I recommend using union() in order to avoid data duplication. Next, we choose only the “Total” numbers, since we are not going to plot labor force indicators by gender. Finally, the pull() command extracts a single vector from the dataframe, just like the $ subsetting operator: we need lf_vectors to be a data object of type vector in order to pass it to the vectors argument of the get_census() function.

There is another way to figure out search terms to put inside the search_census_vectors() function: use Statistics Canada online Census Profile tool. It can be used to quickly explore census data as well as to figure out variables’ names (search terms) and their hierarchical structure.

For example, let’s look at the census labor data for Calgary metropolitan area. Scrolling down, you will quickly find the numbers and text labels for full-time and part-time workers:

Now we know the exact search terms, so we can get precisely the vectors we need, free from any extraneous data:

Note how this code differs from the code with which we extracted labor force involvement rates: since we need the data to be sub-divided both by the type of work and by gender (hence no “Total” values here), we are creating a dataframe that assigns respective labels to each vector number. This work_vectors_labels dataframe will supply categorical labels to be attached to the data retrieved with get_census().

The first mutate() call removes all text up to and including , and and/or (spaces included) from the label column. The second drops unused factor level “Total” – it is a good practice to make sure there are no unused factor levels if you are going to use ggplot2 to plot your data. Finally, setNames() renames variables for convenience.

Finally, let’s retrieve vectors for the education data for the age group from 25 to 64 years, by gender. Before we do this, I’d like to draw your attention to the fact that some of the census data is hierarchical, which means that some variables (census vectors) are included into parent and/or include child variables. It is very important to choose vectors at proper hierarchical levels so that you do not double-count or omit your data.

Education data is a good example of hierarchical data. You can explore data hierarchy using parent_census_vectors() and (child_census_vectors) functions. However, you may find exploring the hierarchy visually to be more convenient: 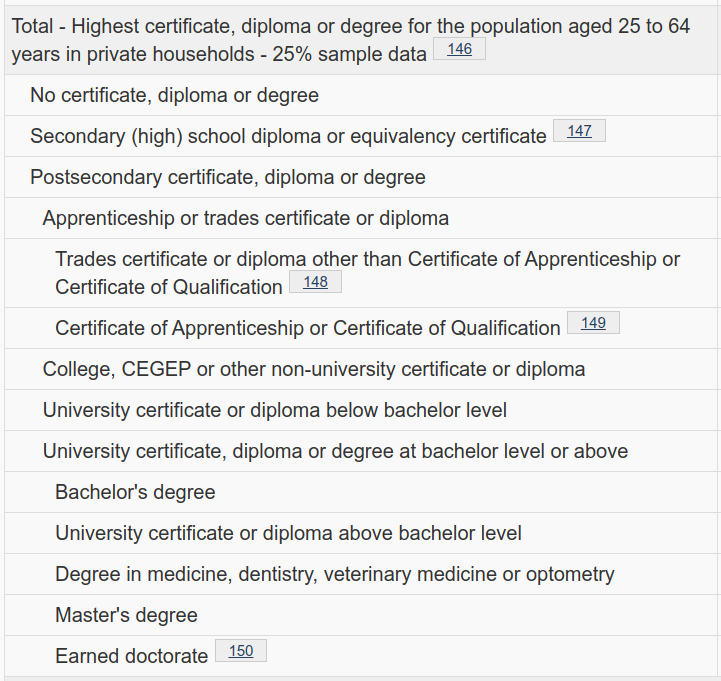 So, let’s now retrieve and label the education data vectors:

Note the slice() function that allows to manually select specific rows from a dataframe: positive numbers choose rows to keep, negative numbers choose rows to drop. I used slice() to drop the hierarchical levels from the data that are either too general or too granular. Note also that I had to edit text strings in the data. Finally, I added asterisks after “Doctorate” and “health”. These are not regex symbols, but actual asterisks that will be used to refer to footnotes in plot captions later on.

Now that we have figured out our dataset, regions, and data vectors (and labeled the vectors, too), we are finally ready to retrieve the data.

To retrieve census data, feed the dataset, regions, and data vectors into get_census() as its’ respective arguments. Note that get_census() has the use_cache argument (set to TRUE by default), which tells get_census() to retrieve data from cache if available. If there is no cached data, the function will query CensusMapper API for the data and will save it in the cache, while use_cache = FALSE will force get_census() to query the API and update the cache.

An important function here is tidyr::pivot_longer(). It converts the dataframe from wide to long format. It takes three columns: employment rate, unemployment rate, and participation rate, and passes their names as values of the indicator variable, while their numeric values are passed to the rate variable. The reason for conversion is that we are going to plot the data for all three labor force indicators in the same graphic, which makes it necessary to store the indicators as a single factor variable.

Note one important difference from the code I used to retrieve the labor force involvement data: here I added the dplyr::left_join() function that joins labels to the census data.

We now have the data and are ready to visualize it, which will be done in the next part of this series.

For those of you who are outside of Canada, Canada’s geographic regions and their largest metropolitan areas are:

These regions should not be confused with 10 provinces and 3 territories, which are Canada’s sub-national administrative divisions, much like states in the U.S. Each region consists of several provinces or territories, except the West Coast, which includes only one province – British Columbia. You can find more about Canada’s geographic regions and territorial structure here (pages 44 to 51).

You can find more about census geographic areas here and here. There is also a glossary of census-related geographic concepts.